At the 11th hour, Damascus American Legion Commander Fred Mitchell opened the annual Veterans Day Service, calling for a moment of silence to honor all who have served America in uniform. He then spoke eloquently about the enormous debt owed to those veterans and challenged his fellow Legionnaires to join in the Post’s initiative to support them. Post 171 Chaplain Larry Matthews, who organized the service, gave the invocation. Following presentation of the colors by the Post Color Guard, Damascus Auxiliary Unit President Amanda Baughman led the audience of about eighty people in the Pledge of Allegiance. The DHS Chorus sang the National Anthem, and Past Post Commander George Bolling conducted the POW/MIA ceremony.

Chaplain Matthews introduced Retired Army Lieutenant Colonel Grady Smith, the guest speaker. Colonel Smith spoke with meaningful emotion about the heroics of three veterans from past wars who had been missing in action until their remains were recovered, returned to their families, and buried with full military honors. He also told the audience about two of his classmates in Officer Candidate School who were killed in action in the Vietnam War and were awarded the Medal of Honor posthumously. He described the devastation a soldier feels when he loses a comrade-in-arms in combat. His remarks were touching, especially to those in the audience who have lost loved ones.

The DHS Chorus sang the rousing medley of service songs and led the audience in singing God Bless America. Chaplain Matthews pronounced the benediction followed by Taps by Post member Mark Elrod. Damascus Sons of the American Legion Commander Todd Stockslager closed the service by thanking the participants. The Auxiliary Unit provided a light lunch for all who attended. 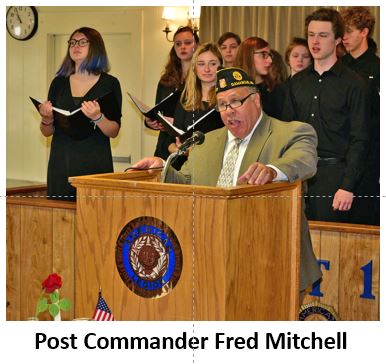 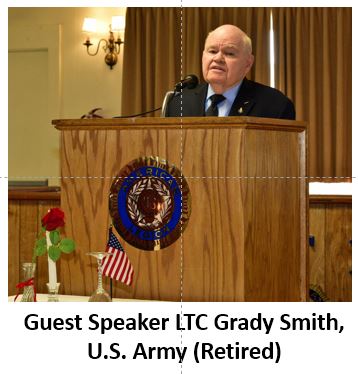